Does our government really care about the quality of life of every Filipino? With the bad traffic, pollution, brownouts, expensive water and electricity rates not to mention tax increases and poor services offered – we’re doomed!
Quality of life (or QOL) is defined as the general well-being of individuals and societies. It covers various fields: international development, healthcare, politics and employment. Standard indicators used to measure the quality of life are: employment, environment, health, education, recreation time and social being.
The most commonly used international measure of development is the Human Development Index (HDI). This measure is a combination of life expectancy, education, and standard of living. The HDI is used by the United Nations Development Program in their Human Development Report. The UN also ranks countries by happiness which is said to be the ultimate outcome of a high quality of life.
How happy are the Filipinos? Last year according to a study of 142 countries comprising 96% of the world’s population conducted by the London-based Legatum Institute Prosperity Index, Norway is the happiest country in the world, the United States ranked 12th and the Philippines 67th. The study was based on 89 indicators grouped into eight categories – economy, entrepreneurship and opportunity, governance, education, health, safety and security, personal freedom and social capital.
It is every government’s ultimate goal to improve the lives and well-being of every citizen. Sad to say, this is not what is happening to us. We continue to live a miserable life. Our government, our environment and the present demands of our society makes us very unhappy.
Read more »
Posted by Admin at 12:04 PM No comments:

Poverty in the Philippines

Poverty remains the most critical social problem that needs to be addressed. Philippines' poverty line marks a per capita income of 16,841 pesos a year. According to the data from the National Statistical Coordination Board, more than one-quarter (27.9%) of the population fell below the poverty line the first semester of 2012, an approximate 1 per cent increase since 2009. This figure is a much lower figure as compared to the 33.1% in 1991.

The decline in poverty has been slow and uneven, much slower than neighboring countries who experienced broadly similar numbers in the 1980s, such as People's Republic of China (PRC), Thailand, Indonesia (where the poverty level lies at 8.5%) or Vietnam (13.5%). This shows that the incidence of poverty has remained significantly high as compared to other countries for almost a decade. The unevenness of the decline has been attributed to a large range of income brackets across regions and sectors, and unmanaged population growth. The Philippines poverty rate is roughly the same level as Haiti.

The USA government's definition of poverty is based on total income received. For example, the poverty level for 2012 in USA was set at $23,050 (total yearly income) for a family of four (one person in each family unit is $11,490).

NumbersUSA Education & Research Foundation is a non-profit, non-partisan organization that favors an environmentally sustainable and economically just America and seeks to educate the public about the effects of high levels of immigration on U.S. overpopulation, the environment, jobs, and wages. We use government data to conduct research on the impacts of U.S. population growth, consumption, sprawl, and current levels of immigration and educate the public, opinion leaders and policy makers on the results of those and other studies.

http://www.youtube.com/watch_popup?v=LPjzfGChGlE&feature=player_embedded
Posted by Admin at 1:06 PM No comments:

Forty percent of food in the United States is never eaten, amounting to $165 billion a year in waste, taking a toll on the country's water resources and significantly increasing greenhouse gas emissions, according to a report from the Natural Resources Defense Council released this week.
The group says more than 20 pounds of food is wasted each month for each of 311 million Americans, amounting to $1,350 to $2,275 annually in waste for a family of four. Think of it as dumping 80 quarter-pound hamburger patties in the garbage each month, or chucking two dozen boxes of breakfast cereal into the trash bin rather than putting them in your pantry.
The report points out waste in all areas of the U.S. food supply chain, from field to plate, from farms to warehouses, from buffets to school cafeterias.

"Food is simply too good to waste," the report says. "Given all the resources demanded for food production, it is critical to make sure that the least amount possible is needlessly squandered on its journey to our plates."

Most of the waste comes in the home, the report says.
"American families throw out approximately 25% of the food and beverages they buy," the report says. It cites several reasons, including that food has been so cheap and plentiful in the United States that Americans don't value it properly.

My take: Why my church rebelled against the American Dream
By David Platt, Special to CNN
December 23, 2010

We American Christians have a way of taking the Jesus of the Bible and twisting him into a version of Jesus that we are more comfortable with.

A nice middle-class American Jesus. A Jesus who doesn’t mind materialism and would never call us to give away everything we have. A Jesus who is fine with nominal devotion that does not infringe on our comforts.

But lately I’ve begun to have hope that the situation is changing.

The 20th-century historian who coined the term “American Dream,” James Truslow Adams, defined it as “a dream… in which each man and each woman shall be able to attain the fullest stature of which they are innately capable, and be recognized by others for what they are.”
But many of us are realizing that Jesus has different priorities. Instead of congratulating us on our self-fulfillment, he confronts us with our inability to accomplish anything of value apart from God. Instead of wanting us to be recognized by others, he beckons us to die to ourselves and seek above all the glory of God.

In my own faith family, the Church at Brook Hills, we have tried to get out from under the American Dream mindset and start living and serving differently. 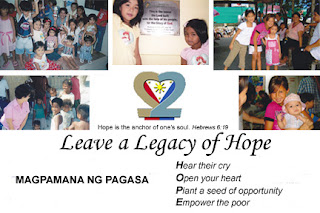 Hunger - One in five, or 3.8 million Filipino families

Hunger hit a new record peak nationwide as one in five, or 3.8 million Filipino families, had experienced having nothing to eat in September 2007. This was the result of the latest survey of the creditable pollster Social Weather Stations (SWS), where the national percentage of families having experienced nothing to eat rose to a high of 21.5 percent.

SWS, which published on Monday the results on BusinessWorld (http://www.bworld.com.ph/), said this was a “dramatic" reversal of gains in June where hunger fell to 14.7% from 19% in February 2007 and November 2006. It added the 21.5% was almost 10 points above the 11.8% average for the 38 hunger surveys it had conducted quarterly starting mid-1998. This was despite government’s implementation of anti-hunger programs like the food-for-school program and the Gulayan ng Bayan to encourage backyard farming.

Earlier, President Arroyo claimed she herself experienced hunger, but was told that the hunger in the SWS surveys refer to involuntary hunger.